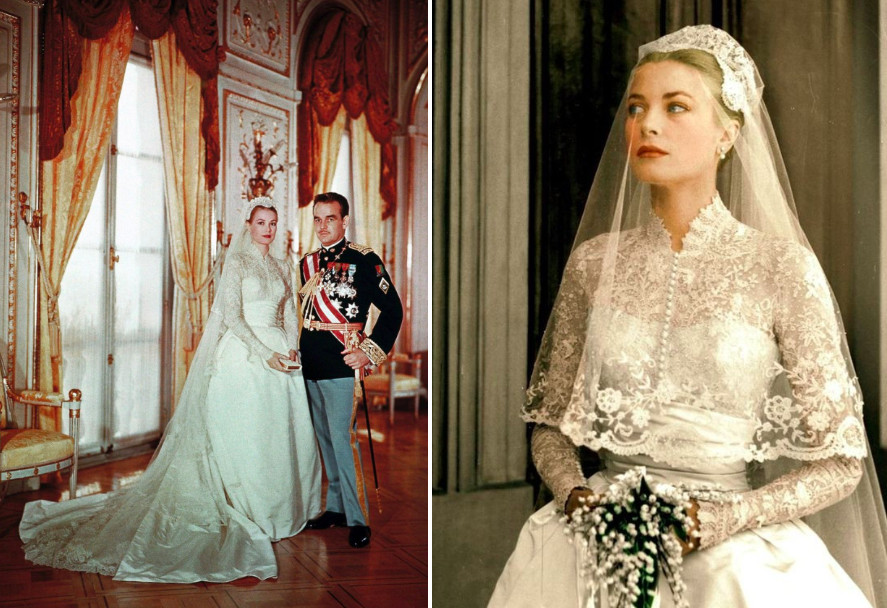 We are starting a series of publications about legendary weddings. This time we remember how the Oscar-winning actress Grace Kelly married Rainier Grimaldi in 1956 - the marriage of the movie star and the reigning prince of Monaco was immediately called “the wedding of the century”. A ceremony that still delights brides around the world.

The prince proposed to his loved on on Christmas Eve. On January 5, 1956, at a press conference, Grace Kelly showed the world her engagement ring: instead of the traditional one large stone, there were several small diamonds and rubies on it - to match the red and white flag of Monaco.

A month later, Kelly received a second engagement ring: a Cartier jewelry made of white gold with the famous 10.5-carat diamond. According to legend, he did it because the first ring with rubies seemed too simple for Grace.

Grace Kelly became the official wife of Prince Rainier III of Monaco on April 18, 1956. At the closed civil ceremony, a few guests were invited, the circle of guests consisted of their closest friends and family. The princess put on a powdery pink ensemble of a closed jacket and a fluffy skirt. The hem was decorated with expensive French Alençon lace, and Grace's head was adorned with a miniature "juliet".

The public wedding took place the next day. The streets of Monte Carlo were crowded with people: more than 20 thousand residents gathered at the Cathedral of St. Nicholas, where the wedding took place. The residents of the city were offered a wedding meal and free champagne. There were about a thousand invited guests, including representatives of European royal families, politicians, billionaires and movie stars.

Grace was escourted to the wedding ceremony on a boat, and her exit was accompanied by a scattering of armfuls of white and red carnations - they were thrown off directly from a helicopter. A Rolls Royce was parked outside the wedding marquee- a gift to the couple from the citizens of the principality.

At the gala dinner after the ceremony, Rainier struck a crushing blow with his sword at a luxurious six-story palace-shaped cake - a tribute to the traditions of the court. The wedding cost $ 45-55 million. The outfit of the Princess of Monaco became the standard for brides for many years. Her main dress was created by Metro Goldwyn Mayer MGM designer Helen Rose from vintage Belgian lace bought by Prince Rainier from the State Museum. Three dozen tailors worked on the outfit over six weeks: 125 meters of handmade ivory, pearls, silk taffeta and a lace tiara in her hair with wax and paper orange blossoms required meticulous professional work.

The veil was specially made to be as transparent as possible, because the actress's face should be visible in the photographs. Today, the cost of the outfit is estimated at about 300 thousand dollars, and you can see it with your own eyes at the Philadelphia Museum of Art.

Grace Kelly did not have a bouquet as such. By tradition, she ascended to the altar with a prayer book trimmed with beads and semi-precious stones, holding in her hands only a simplistic armful of lilies of the valley.

After becoming the princess of Monaco, Grace Kelly retired from her film career. They lived with Prince Rainier III for more than 25 years and raised three children. In 1982, Grace got into a car accident and received life-threatening injuries - with the consent of her husband, she was disconnected from life support. Rainier III remained a widower until the end of his life.