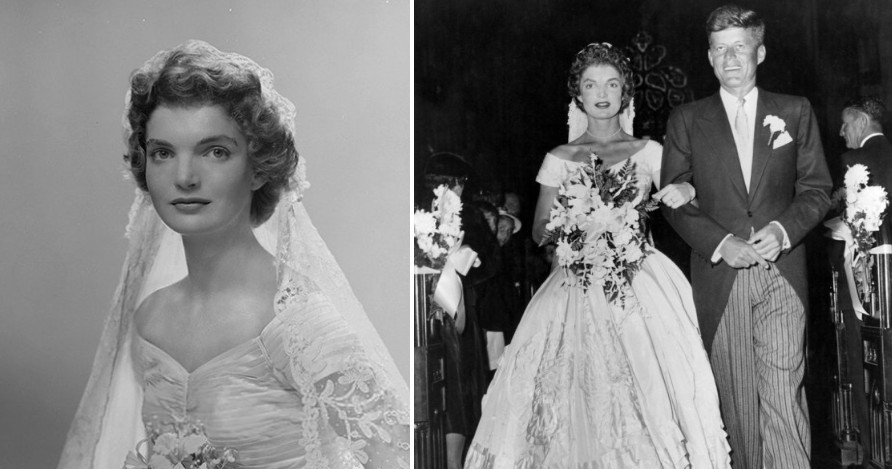 To remember and be inspired by

The wedding of the 35th President of the United States of America and style icon Jacqueline Lee Bouvier was a landmark event in the 20th century. Here's how it was, so you can find inspiration in retro luxury for your own wedding.

The future bride and groom were introduced to each other by friends. Surprisingly, there is still no exact information about how John F. Kennedy proposed to his loved one. According to one version of the story, this happened in the most popular restaurant among American officials, Martin`s Tavern in Washington, a year after they met. And their wedding took place two months later.

The iconic wedding dress and bridesmaid outfits were designed by Anne Lowe, a 1950s secular New York designer. Anne Lowe's salon has been famous for its quality since the 1940s. She was also the bride's compatriot, unlike the European couturiers who offered their services. It had great importance for the wedding of a major politician in the middle of the 20th century.

The legendary lampshade dress made for Jacqueline Kennedy has gone down in fashion history ever since. It took over two months and 45 meters of silk taffeta to make this masterpiece. Anne Lowe's creation became a sensation: for the first time, ivory was chosen for the bride's outfit, rather than classic white.

Ten days before the wedding, a disaster struck: the water pipes suddenly burst in the atelier, and the bride's outfit was ruined. Ann Lowe had to fight day and night for the life of her masterpiece, and she managed it! The designer was rewarded for her work with lifelong fame and a warm relationship with the First Lady. However, Jacqueline herself was not happy with the wedding dress, because she did not participate in its creation: her mother, Jeanette Lee Bouvier, approved everything with the designer. Currently, the wedding dress, which has become cultural property of America, can be seen at the John F. Kennedy Presidential Library and Museum in Boston.

Her jewelry and bouquet

Jackie's head was adorned with a tiara and her grandmother's vintage handmade lace veil, which has become a family heirloom. The bride wore a few accessories, but all of them indicated the presence of impeccable taste: a wedding ring inlaid with pearls, a string of pearls around her neck and a Van Cleef & Arpels engagement bracelet - a gift from the groom. The bride's bouquet of large orchids and gardenias matched her luxurious outfit.

John and Jackie got married on September 12, 1953, at St Mary's Church in Newport, Rhode Island. The Pope himself blessed the Kennedy couple for a long and happy life together. The wedding ceremony was attended by about 700 guests, and 1200 people attended the home celebration. The groom's family insisted on there being so many guests. The festivities took place in Hammersmith Far, the ancestral estate of Bouvier family, where the entire high society of New York, from politicians to Hollywood stars, received an invite. John and his wife fell in love with this mansion so much that they spent the whole weekend there. Soon, the estate received the unofficial title of the "Summer White House".

For their first dance, the newlyweds chose the song “I Married an Angel”. According to the guests, it was the most touching and sincere moment of the celebration. The evening ended with a custom made by Plourdes' Fall River bakery wedding cake. It became part of culinary legend and a wedding classic.