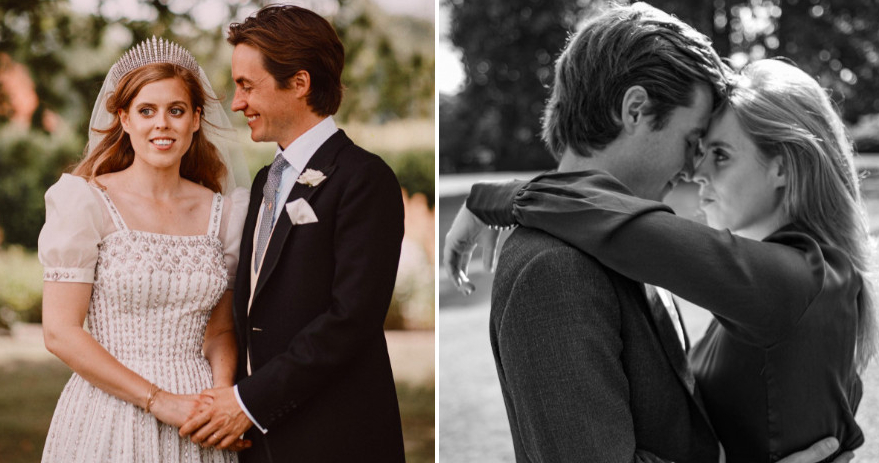 The most fashionable wedding of princess Beatrice. Photos and details.
20 / 07 / 2020
Magazine / Real weddings

Zeitgeist and trends 2020 in one celebration

Although Princess Beatrice — the granddaughter of Queen Elizabeth — isn’t very popular in Russia, her wedding to Italian businessman Edoardo Mapelli Mozzi became the most talked about event of the weekend. And it doesn't matter that royal weddings always attract attention. The truth is that Beatrice's occasion isn’t usual. As members of the royal family, they could organize any scale event, but they made it so intimate, sentimental, meaningful primarily for themselves, and at the same time modern. We’ll tell you the most interesting nuances of the princess’ celebration, which reflected the spirit of the times and wedding trends in 2020.

Usually, there are hundreds of guests at royal weddings. They are many distant relatives, friends of the newlyweds, and the queen's close associates, and celebrities. Remember Megan and Harry’s event that brought together the whole of England. Beatrice and Edoardo made a mini-revolution by inviting only 15-20 people to the wedding. They are the closest relatives — the parents of the newlyweds, the bride's grandmother Queen Elizabeth II and grandfather Prince Philip, brothers and sisters. Everyone was asked to keep the celebration in a secret, and the reporters found out about it when all the guests were already in place.

Family members played an important role in the ceremony. The role of best man was played by Edoardo's four-year-old son from his first marriage — it seems like a beautiful and sweet gesture showing the relatives’ unification. Despite the scandal surrounding the father of the princess, Prince Andrew came to his daughter's wedding and brought her to the altar. Then he delicately left and didn’t pose for joint pictures.

We understand that the Queen of England's granddaughter can afford any dress, and the world's best designers will be happy to work with her. But Beatrice chose a completely different path — touching and sensual. She put on the dress of Queen Elizabeth.

The dress was hemmed and designed to look modern, special for the bride. The bodice with diamonds wasn’t changed, but the hem was slightly altered, the volume at the bottom was removed, and the light sleeves were added. So Beatrice got a unique dress, but with a sentimental story at the same time. The look was complemented by the Elizabeth II diadem that she put on her wedding ceremony with Prince Philip in 1947.

Beatrice and Edoardo didn’t have lengthy discussions of invitation design, cake tastings, and other pre-wedding chores, which sometimes can be dragged on for months and exhausting nerves. You will be surprised, but this wedding was organized by the bride and her mother in just two weeks. Beatrice had only one bridesmaid, and to the chapel in Windsor Park — her wedding site — she just walked.

The main emphasis was placed on the decor, although there is nothing superfluous here. Nobody from the wedding industry will be surprised by a voluminous flower arch, but this one, in muted pink and creamy shades, was the best fit for the couple, the look of the bride and her vintage dress.

All precautions were taken at the royal wedding. Note that the official photo shows the Queen and Prince Philip in the open air away from the newlyweds — this was done on purpose to keep a social distance. As far as journalists know, after the ceremony, Beatrice and Edoardo also hosted a small family dinner in an open area so that the guests weren’t in the same room.